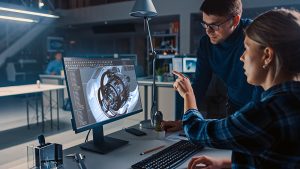 Situation: A $10-million manufacturer of industrial products was experiencing a tight cash position. Although the company had been profitable in the past, it had posted significant losses for two years when revenues dropped. Recent new orders were secured, but the company had no cash with which to buy raw materials. The 30-year-old Midwest company’s performance was being called into question by its senior secured lender. The lender invited Platinum Group to help the owner create a path to success.

Response: Platinum Group conducted a due diligence analysis to identify key performance issues. The company’s cash position was so tight that it was deemed to run out of cash in a matter of weeks if certain actions were not taken quickly. And a liquidation analysis confirmed the company was under water – not able to pay the bank nor realize the book of orders in hand. The recommendation was to raise capital to enable fulfillment of the backlog of orders, which would increase the company's working capital.

Platinum raised $1 million in outside capital through private investors and created a 13-week, rolling cashflow forecast to determine how and when to spend the new funds. New equipment and employees were brought in to help fulfill the outstanding orders. Due to COVD-19, the Paycheck Protection Program (PPP) not only allowed the company to maintain headcount but also helped to navigate six-month extensions on all debt.

Another strategy that Platinum put into place was an informal plan of reorganization trade creditor program. Through communications with 100 vendors, each unsecured creditor was assured of receiving overdue payments within a three-year period. Platinum also negotiated cash on delivery (COD) status for future products and services.

Results: After about 10 months, the company returned to positive net income due to the book of business starting to
meet sales projections. With Platinum’s help, the existing bank is still in place and the company is slowly paying down its debt on a regular basis. Although the manufacturer is still not completely out of the woods, the owner is relieved that progress is being made. Platinum has started the process of refinancing the higher interest debt to reduce debt service cost and ensure the ongoing viability of the company.