Situation: In Part 1, Platinum Group had stepped into a long-time family business in map publishing to manage a turnaround during the 2008 recession. The company’s business model was sinking fast due to an outdated business model being replaced by new technology and severe cash flow crisis. Yet the company had valuable intellectual property in the form of a database. Platinum helped the founder to develop it into a GPS-based, SaaS business model for the school district marketplace. 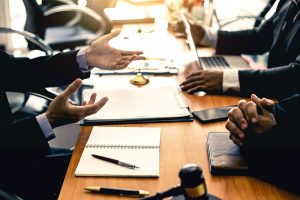 Once the concept was validated, Platinum brought in a seasoned executive with extensive K-12 school experience, raised more than a million dollars to support future growth, and arranged for a private lender to become the senior secured lender. Over the next decade, the company slowly grew. Platinum sat on the company’s board and provided governance, accounting and strategic services. With a strong recurring-business model, the company was eventually sought after by several strategic buyers and in late 2019, Platinum facilitated a sale transaction based on a letter of intent from a strategic buyer that had the capability to expand the company’s footprint.

Response: Platinum worked closely with the board of directors, CEO and investors to structure a response to the valuation changes and address the ongoing “hoops” to jump through for closing. When the buyer would not agree to this response, Platinum advised the company to take a stand and walk away from the deal. The company agreed and Platinum informed the buyer that the deal was off. The company walked away from the transaction, knowing it was taking a calculated risk – the risk of losing the buyer permanently.

Results: After more than a week, the buyer called Platinum, accepting all points in the company’s counter-offer, an all-cash deal, eliminating an 18-month escrow and earn-out. Platinum also negotiated the private purchase of the dissident shareholder’s shares prior to closing, eliminating the final roadblock and paving the way to close the sale on February 28. The CEO and family were thrilled with the deal and investors received a healthy return on investment. At the shareholders meeting following the closing, Platinum’s Dean Bachelor commented, “This is a good example of fulfilling our firm’s mission – Meaningful Capitalism – by helping a family business over a long period to achieve value. Our persistence paid off after more than a decade of guiding the company in multiple ways, raising capital and culminating in a successful sale. Persistence pays!” Post Script: By the second week of March, most school systems were closed due to COVID-19, which has prevented the new buyer from realizing new revenues since the purchase. This was a timely transaction from the seller’s perspective… very timely.