Over the past 30 years as a family business consultant, I have come across many differences that have eroded family relationships. One involved Uncle Joe and his nephew, Bruce, as they were going through a painful succession planning process. In addition to the typical family business issues of ownership, estate and leadership, they were grappling with matters related to family history and intellectual property.

History played a part in the situation in that when Bruce was 10 years old, both of his parents died in a plane crash. Bruce’s sister went to live with another uncle, and Bruce and his brother, Pat, came to live with Uncle Joe, his wife, Nancy and their children—two boys and a girl. The cousins were all about the same age, with Bruce being the oldest and Pat in between the two boys. It was an abrupt change for Uncle Joe’s family, but everyone did their part to make Bruce and Pat feel welcomed and part of the family. Even though all of the kids were cousins, they felt and acted like siblings. Joe and Nancy became quasi parents to Bruce and Pat.

At the time of the plane crash, Joe was involved in a construction business with his two brothers. Their working relationship was not good. As a result, Joe eventually split off and started his own construction business. As Joe’s two biological sons grew up and graduated from college, they came into their father’s business. From the beginning, the sons and their father had issues about workload, roles, responsibilities and decision making.

Joe’s two sons were talented and eventually told their father that because of the friction, either he would have to leave the business, or they would leave. Reluctantly, Joe decided to leave and saw himself being phased out of his own business.

An engineer by training, Joe, while still in the business, puttered a lot and came up with an invention that had the potential to add value to an already existing product. He patented his idea, but not much else happened with it.

In the meantime, Bruce’s brother, Pat graduated from college, moved to the East Coast and did not have much contact with his family. On the other hand, Bruce, graduated from college, gained experiences working outside the family business in various marketing positions, and eventually moved back to his hometown and began collaborating with Joe on his patented invention. 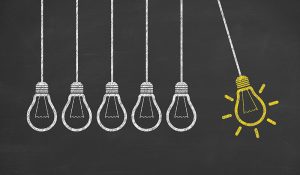 After Bruce conducted several marketing surveys and attended multiple trade shows, he determined there was an opportunity to create a viable business selling Uncle Joe’s invention throughout the U.S. Initially, he and his uncle got along well, but as the business grew Bruce wanted more control and pushed his uncle for a succession plan that would give him controlling interest in the company and allow him to continue to make major leadership decisions for the company.

At this point in his career, Joe was in his early 70s, but balked at the idea of creating a succession plan. From his perspective, he was not ready to retire. Meanwhile, Bruce concluded that if he were to continue to grow the company, it would be more expensive to buy it. In addition, his Uncle Joe continued to own the patent for the device that was the basis of the company’s success.

In many cases, the owner-entrepreneur is the intellectual property of the company. Usually, his/her plans for the company are kept in their head rather than having a formal written business plan. In this case, Uncle Joe had consulted an attorney and created a patent for his idea. Naturally, he saw the patent as a potential source of revenue, and he was doing his best to protect his patent and revenue stream.

As both Uncle Joe and Bruce were not communicators, they were unable to understand each other’s perspective. Uncle Joe could not understand Bruce’s concern about the expense of buying the company and controlling his own destiny. Bruce was unable to understand Uncle Joe’s need for security, protection for the patent, and the need to feel relevant at the company. Despite their best efforts to resolve differences using their professional advisor, Uncle Joe and Bruce were deadlocked and company employees were caught in the middle.

The situation was further complicated as there were no formal agreements between Uncle Joe and Bruce. They neglected to create formal structure, “because they loved each other.” This is a common mistake in family-owned businesses.

Another matter complicating the resolution of the patent and succession issues was unresolved emotional issues between Uncle Joe and Bruce dating back to the death of Bruce’s parents. For his part, Uncle Joe was feeling unappreciated for taking Bruce and Pat into his family. Bruce had unexpressed feelings of hurt over how his parents’ assets were dispersed, and how he and Pat were never consulted about their “family treasures.” The hurt ran deep on both sides.

One of the interventions I suggested for the family was the Family Forgiveness Ritual.© The entire family participated, including Uncle Joe, his three adult children and spouses, along with Bruce and his spouse. The emotional result for the family was spectacular. It opened the door, emotionally speaking, allowing for a more positive attitude in future business discussions.

This was good as resolution of issues on the business side took much longer. After numerous meetings, Uncle Joe sold his share of the business to Bruce and retained ownership of the patent, which upon his death will transfer to Bruce.

In retrospect, many of the technical issues could have been minimized by a clear set of “ground rules” or expectations set at the time the business was initiated. I suggest that included in the set of ground rules could have been a buy-sell agreement. What’s more, if the family would have had wisdom on their side, they would have conducted regular family meetings to discuss and alleviate the emotional issues that had beset the family.

Hindsight is easier than foresight. Hopefully in reading stories such as these, you gain perspective and ideas that can help you as you either set up or continue to grow your family business.